The Poetry Center offers a variety of programs and activities that help expand its mission of bringing poetry to an ever-widening audience.

The Poetry Center administers the following awards and activities:

The West Chester University Poetry Center offers an active, interesting, and diverse slate of activities. We invite you to join us and discover the joys of poetry.

Stay tuned to this website's Events page for more information and updates. 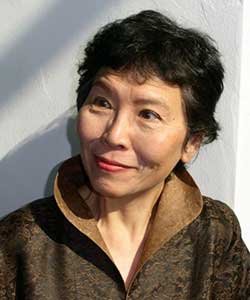 Purpose of the fund:

The Shirley Geok-lin Lim Award is an annual distribution of up to $1,000 for the chosen recipient to attend the WCU Poetry Conference or WCU Poetry Workshop.  The distribution may be used for economy travel and accommodations.

The recipient must be a K-12 teacher from the United States who actively teaches the writing of poetry. Applicants must submit a letter from their principal verifying they teach writing and poetry in the classroom. They must submit 3-6 original poems in form and a copy of a lesson plan for teaching poetry.  Submissions will be directed to the Dean of the College of Arts and Humanities for review in coordination with the WCU Poetry Center Director. Please submit all documents to poetry@wcupa.edu with a subject line of “Shirley Lim Award.”

Born in Malacca, Malaysia, Shirley Geok-lin Lim was raised by her Chinese father and attended missionary schools. Although her first languages were Malay and the Hokkien dialect of Chinese, she was reading English poetry by the time she was six. At 10, her first poem was published in The Malacca Times; by age 11, she knew she wanted to be a poet. She earned her B.A. from the University of Malaya and her Ph.D, from Brandeis University.

Lim considers herself primarily a poet, although she has also written three books of short stories, numerous critical texts, three novels, and a memoir. Her debut collection, Crossing the Peninsula and Other Poems (Heinemann, 1980) won the Commonwealth Poetry Prize, a first for a woman and an Asian. Her ten poetry collections include three published in 2015, Ars Poetica for the Day, The Irreversible Sun, and Do You Live In? Embracing the Angel focused on the Democracy Movement that she observed first hand while a Visiting Distinguished Professor in Hong Kong in 2014. Her many awards include the UCSB Faculty Research Lecturer Award (the highest honor UCSB offers its faculty), Fulbright Distinguished Lecturer Awards, two American Book Awards, and the Society for the Study of Multi-Ethnic Literature of the United States Lifetime Achievement Award.

The West Chester University Poetry Center was created in 2000 to further the study and appreciation of poetry. The goals of the Poetry Center are to:

Board members are identified and recommended by the members of the WCU Poetry Center Advisory Board and the Program Director of the Poetry Center in consultation with the West Chester University Advancement Office. All appointments to the Board are approved and made by the President of West Chester University. The Board is composed of members/advocates of the arts community, University alumni, and local and national business and civic leaders.

The Faculty Advisory Committee’s purpose is to support the mission of the WCU Poetry Center, as articulated in its founding NEH endowment grant: "to create an environment in which humanities and arts are integrated, and focused on the broader implications of Poetry".

Specifically, the committee’s charge is to: